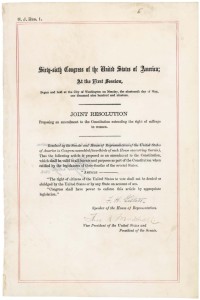 Introduced in 1878, approved by Congress in 1919, and ratified on August 18, 1920, the Nineteenth Amendment to the Constitution prohibits any citizen of the United States from being denied the right to vote on the basis of sex.

The women’s rights movement began at the 1848 Seneca Falls Convention in New York and the women’s suffrage movement picked up during the Reconstruction Era, after the Civil War. Women’s rights leaders fought for the inclusion of universal suffrage as a civil right in the Thirteenth, Fourteenth, and Fifteenth Amendments.

In 1869, the National Woman Suffrage Association was founded by Susan B. Anthony and Elizabeth Cady Stanton. They brought the issue to federal court, arguing that the Fourteenth and Fifteenth Amendments together guaranteed voting rights to women, but ultimately the Supreme Court rejected their justification in Minor v. Happersett. This spurred a shift to advocating for a new constitutional amendment.

Carrie Chapman Catt revitalized the National Woman Suffrage Association in the early 1900s and helped New York achieve state-level suffrage in 1917. A year later, President Woodrow Wilson endorsed women’s suffrage in his State of the Union address and appealed to Congress. A new Nineteenth Amendment was proposed, with wording identical to the Fifteenth Amendment, except it prohibited the denial to vote on the basis of sex instead of on the premise of “race, color, or previous condition of servitude.” 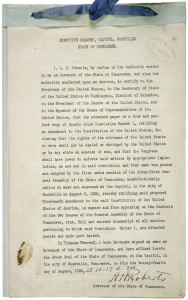 In May and June of 1919,  the amendment passed both the House and Senate, and was sent to the states for ratification. Tennessee provided the final ratification (seen here, left) necessary by approving the Nineteenth Amendment with 50.5% of their House of Representatives voting yes on August 18, 1920.

This document is being featured in conjunction with the National Archives’ Amending America exhibit. Click here to see more related records.