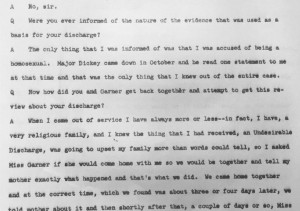 Until 2011, soldiers could be dishonorably discharged if they were discovered to be gay. In 1960, US Air Force Reservist Fannie Mae Clackum was the first to successfully challenge her dishonorable discharge.

After contentious debate, a new policy labeled “Don’t Ask, Don’t Tell” (DADT) emerged. In theory, DADT allowed lesbians and gays to serve if they did not make their sexual orientation public. Commanders were not to inquire regarding a service member’s orientation, as they had in the past. However, thousands of gay men and lesbians were discharged from the military while DADT was in effect.

Records of the U.S. Court of Claims, National Archives and Records Administration.