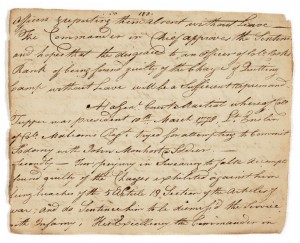 On March 10, 1778, Lieutenant Frederick Gotthold Enslin became the first U.S. soldier court-martialed for “attempting to commit sodomy” with another soldier. His sentence was to be literally drummed out of the Continental Army by its regiments’ fifes and drums. Enslin was told “never to return.”