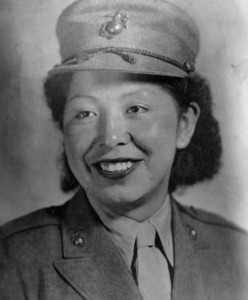 In 1943, Minnie Spotted Wolf was the first Native American woman to enlisted in the United States Marine Corps Women’s Reserve. Spotted Wolf served for four years in the Marines as a heavy equipment operator as well as a driver.

Born and raised on a ranch near Heart Butte, Montana, Spotted Wolf stated that growing up doing such ranch work as “cutting fence posts, driving a two-ton truck, and breaking horses” prepared her for the rigors of Marine Corps boot camp, which she was quoted as saying was “hard, but not too hard.”