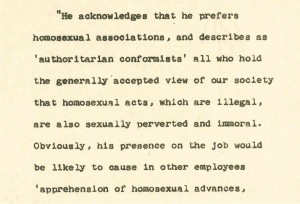 In 1956, Bruce Scott was fired from his job at the Labor Department because he was gay. Five years later he applied for another job at the same agency. Although he passed a qualifying exam, he was declared “ineligible for federal employment on the grounds of immoral conduct.”
In 1965, Scott appealed to the US District Court of Appeals for DC, which ruled in September 1968 that he must be considered eligible for federal employment.

Records of the US District Court for DC, National Archives and Records Administration.