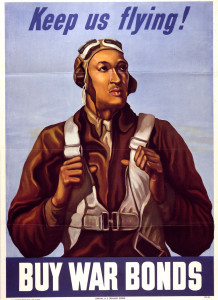 The 99th Pursuit Squadron trained at the Tuskegee Institute in Tuskegee, Alabama, where there was an airfield and a civilian pilot training program. Soon, “Tuskegee Airmen” became the nickname for the World War II Army Air Forces units that were made up predominantly of African American pilots and maintenance crews.

From 1941 to 1946, hundreds of African Americans successfully trained as pilots at the Tuskegee Institute, serving with distinction throughout the war. They flew 1,578 combat missions and earned three Distinguished Unit Citations, at least one Silver Star, and 96 Distinguished Flying Crosses. However, they were fighting for freedom on two fronts: against Nazism in Europe and against discrimination at home in the United States.

From the beginning of the war, African Americans serving in the Armed Forces were segregated into all-black units and limited in the types of positions they could hold. To allow for the creation of the 99th Pursuit Squadron and similar units, Congress had passed legislation in 1939 expanding the Army Air Corps (the precursor to today’s Air Force). Among the act’s provisions was the creation of training programs located at historically black colleges to prepare African Americans for Air Corps service. It wasn’t until after the war that President Harry S. Truman signed Executive Order 9981 in 1948, leading to the desegregation of the United States military.

On March 29, 2007, these pilots received the Congressional Gold Medal from President George W. Bush for their commitment and service to the nation.

In celebration of the 75th anniversary of the creation of this historic unit, a flight report from a mission flown in support of the Anzio, Italy invasion and a petition sent to the War Department by officers protesting discriminatory practices in the Army Air Forces were on display in the “Featured Documents” exhibit in the East Rotunda Gallery of the National Archives in Washington, DC, from January  7, 2016, through March 2, 2016.