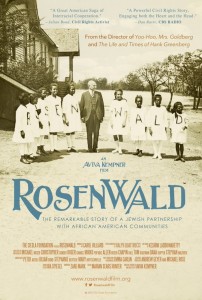 Rosenwald is the story of Julius Rosenwald, who never finished high school but rose to become the president of Sears. Influenced by Booker T. Washington’s writings, this Jewish philanthropist joined forces with African American communities during the Jim Crow South to build over 5,300 schools during the early 20th century. Director Aviva Kempner will introduce ​the film and be joined by author and journalist A’Lelia Bundles for a post-screening discussion. (2015; 100 minutes)