Making Their Mark: Stories Through Signatures 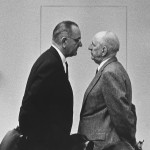 A signature can be as routine as a mark on a form or as extraordinary as a stroke of the pen that changes the course of history. Through their signatures, for example, the 56 men who signed the Declaration of Independence simultaneously committed the brave (or dangerously foolish) act of treason against King George III and created a new nation. 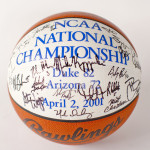 Well-known signatures are found throughout the records of the National Archives. Equally important are the multitude of marks by people unknown to history. All of these documents represent fascinating stories to be discovered. 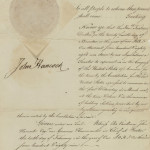 “Making Their Mark: Stories Through Signatures,” now on display in the Lawrence F. O’Brien Gallery of the National Archives Museum, features original signatures from the National Archives’ nationwide holdings, including records from the Presidential libraries. They illustrate the many ways people have placed their signatures on history, from developing a signature style to signing groundbreaking policy into law. From Hollywood to Washington, DC, a variety of letters, patents, photographs, artifacts, and pieces of legislation are featured in this exhibition. 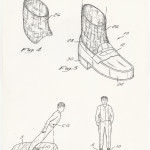 The stories in these records, of famous and infamous, known and unknown individuals are all part of our nation’s history, all making their marks on the American narrative. The exhibition also explores the different ways to “sign” a document, from John Hancock’s famous pen strokes to the current evolution of electronic signatures.

The exhibit also features a collection of 50 pens used by Presidents Kennedy and Johnson to sign important pieces of legislation like the Peace Corps Act and the 1964 Civil Rights Act. The collection is on loan from the Lawrence F. O’Brien family.

An eguide to the exhibition, written by curator Jennifer Johnson, is now available. You can download it free from the iBookstore, as an epub, or as a pdf.

“Making Their Mark: Stories Through Signatures” is made possible in part by the Foundation for the National Archives with the generous support of Lead Sponsor

Major additional support provided by the Lawrence F. O’Brien Family and members of the Board of the Foundation for the National Archives.