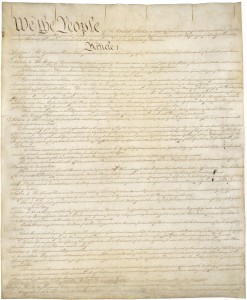 On September 17 join us in celebrating Constitution Day on the anniversary of the signing of one of our founding documents, exploring what it really means to be “We the people . . ” It is also Citizenship Day, welcoming and honoring new American citizens.

To celebrate this momentous document and its influence on American history and culture throughout the past 228 years, join us at the National Archives for a packed day of free public programming for all ages!

Senator Mike Lee will be discussing  little-known stories behind six of the Constitution’s most indispensable provisions and how the courts, Congress and the executive branch have used the Constitution to their own advantage in Our Lost Constitution: The Willful Subversion of America’s Founding Document at noon in the William G. McGowan Theater.

For our younger citizens there will be Constitution Day Family Activities in the Boeing Learning Center from 1 pm until 4 pm. Children and adults alike can test their knowledge with the Preamble Scramble, make revolutionary-era paper wigs, and much more!

At 7 pm in the McGowan Theater, there will be a lively panel discussion on what the future holds for the Constitution, and what challenges the leaders of tomorrow may face in protecting the ideals enshrined in its provisions in The Young Madisons: Why a New Generation Is Standing Up for the Constitution.

If you want to get your own copy of the Constitution, celebrate “We the People,” or learn more about our founding documents – all while supporting civics education! – check out the wide selection available at the myArchives Store.