On September 2, 1945, representatives from the Japanese government and Allied forces assembled aboard the USS Missouri in Tokyo Bay to sign the Japanese Instrument of Surrender, which effectively ended World War II.

The document was prepared by the U.S. War Department and approved by President Harry S. Truman. Eight short paragraphs formalized the “unconditional surrender to the Allied Powers of the Japanese Imperial General Headquarters and of all Japanese armed forces and all armed forces under Japanese control wherever situated.” The Japanese signatories of the surrender were Foreign Minister Mamoru Shigemitsu and General Yoshijiro Umezu, Chief of the Army General Staff, and acting as Supreme Commander of the Allied Forces General Douglas MacArthur accepted their surrender. The formal ceremony was witnessed by delegates from the other Allied nations, including China, the United Kingdom, the USSR, France, Australia, Canada, the Netherlands and New Zealand.

The surrender came after almost two years of continuous defeats for the Imperial Japanese Army, compounded by the devastating atomic bombing of Hiroshima and Nagasaki in early August 1945. Word of the Japanese surrender became public on August 14, when President Truman addressed the nation, and August 15 was marked by victory celebrations across the world. 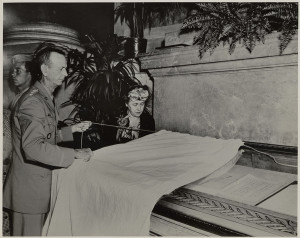 On September 7, the Japanese Surrender Instruments were presented to President Truman in Washington, DC, and in less than a week later, they were put on public display in the Rotunda of the National Archives, where the the Declaration of Independence, the U.S. Constitution and the Bill of Rights reside today.

Download a high-resolution version of this document from the National Archives’ online catalog.

This document was on display in the “Featured Documents” exhibit in the National Archives in Washington, DC August 27 through November 11, 2015.