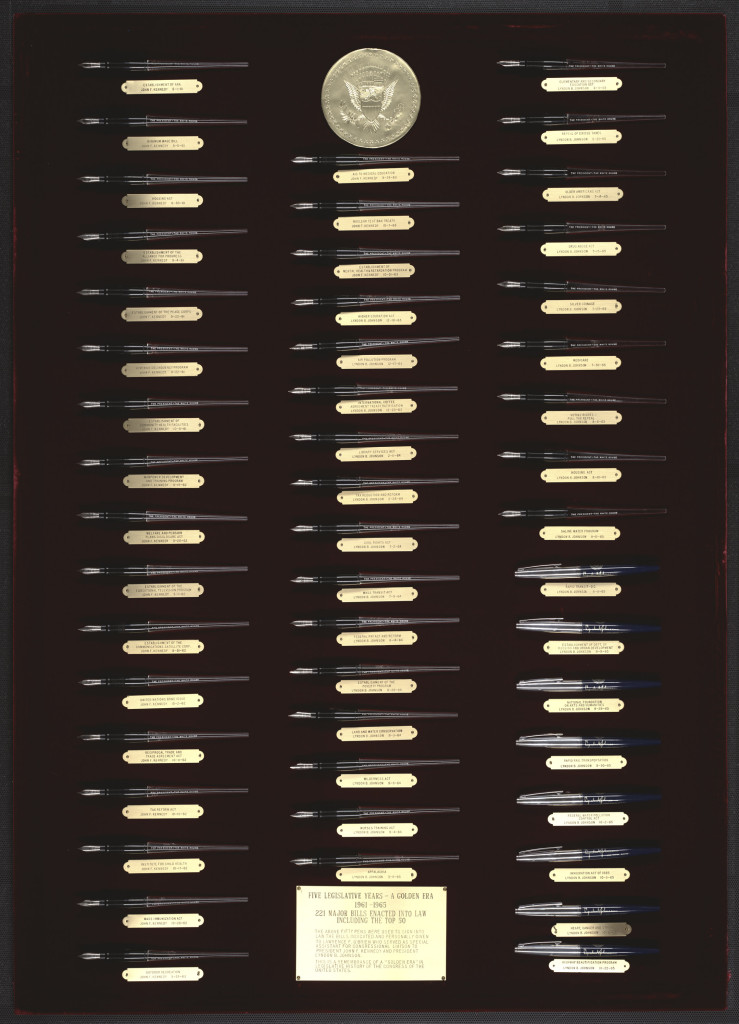 Featured in the National Archives Museum’s latest exhibition, “Making Their Mark: Stories Through Signatures,” in the Lawrence F. O’Brien Gallery, these 50 pens were collected by Lawrence F. O’Brien during the Kennedy and Johnson administrations, 1961-1965. During that time, 221 pieces of legislation were enacted.

Presidents often use several pens to sign important legislation and present the pens as keepsakes of the occasion.  The pens shown here were given to Lawrence F. O’Brien, in recognition of his contribution to the passage of the numerous acts.  Surrounding the display of pens in the exhibit are photos showing the laws in action. This collection is in the exhibit courtesy of Lawrence F. O’Brien III, a past president and current member of the board of the Foundation for the National Archives.

Established during the fear filled days of the Cold War, the Peace Corps was one of the Kennedy administrations ideas to bolster the American image abroad and sway countries in the so-called “third world” away from the alluring images promoting Soviet communism. The idea behind the Corps was an “army of volunteers,” teachers, doctors, engineers, and citizens from every walk of life, building schools, helping grow crops, and improving the lives of people in less developed regions of the world.

Though domestically unpopular initially, the forward thinking program proved to be successful in its main goal of improving the world’s opinion of U.S. foreign policy. To this day, the Peace Corps is dedicated to improving the lives and conditions of people around the world.

The 1964 Civil Rights Act, pushed by President Kennedy and then President Johnson immediately after he assumed the office, had a long road to travel towards its eventual passage. In the early days of the Johnson presidency the bill was stuck in the House Rules Committee. Facing resistance from the committee chair Howard W. Smith, President Johnson looked to the President Kennedy’s longtime advisor, Larry F. O’Brien, to organize members of the House of Representatives to sign a discharge petition to force the bill out of committee negotiations and onto the House floor for debate.

The pressure from the discharge petition, as well as letters from unions, church leaders and civil rights groups, eventually forced Smith to bring the bill up for debate in the committee where it passed with an 11-4 vote.

The full list of legislation represented by this collection, as well as the President that used each pen is listed below.

A longtime advisor to President John F. Kennedy and his Special Assistant for Congressional Relations, O’Brien was in Dallas on November 22, 1963, riding in the motorcade in which President Kennedy was killed. After the assassination, he continued with Lyndon Johnson as the new President’s congressional liaison. His knowledge of the political and lawmaking process helped to guide landmark Great Society legislation such as the 1964 Civil Rights Act, Medicare, and the 1965 Voting Rights Act through Congress.

President Johnson appointed O’Brien to his Cabinet as Postmaster General in 1965. In 1968, he resigned to run Robert F. Kennedy’s campaign for President and was in Los Angeles for the California Democratic primary the evening Kennedy was assassinated there. Elected Chairman of the Democratic National Committee (DNC) in 1968 and again in 1970, O’Brien featured prominently in another historic event. On June 17, 1972, burglars broke into his Washington, DC, office at the DNC headquarters in the Watergate complex, beginning a series of events that led to the 1974 resignation of President Richard Nixon.

In 1975, O’Brien was elected Commissioner of the National Basketball Association (NBA). Upon his retirement in 1984, the NBA permanently named its world championship trophy, “The Larry O’Brien Trophy.” He was inducted into the Basketball Hall of Fame in 1991.

In his honor, the Lawrence F. O’Brien family helped create the O’Brien Gallery in the National Archives Museum in 2004 and continues to generously support its exhibitions.