The National Archives Foundation honored American author and Pulitzer Prize winner Taylor Branch with its 2015 Records of Achievement Award at a black-tie gala at the National Archives last night. The honor recognizes Branch’s lifelong work to chronicle the life of Dr. Martin Luther King Jr. and the history of the Civil Rights movement in his landmark series America in the King Years.

The Records of Achievement Award is an annual tribute given to an individual whose work has cultivated a broader national awareness of the history and identity of the United States through the use of original records, including those preserved by the National Archives. 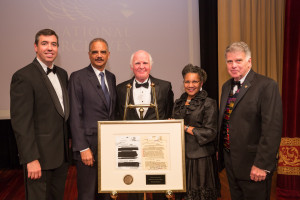 “As our nation observes the 50th anniversary of the Voting Rights Act, it feels especially appropriate to salute Taylor Branch’s meticulous scholarship and his gift for bringing the details of that pivotal era to life,” said Foundation Chair Bundles.

“The country’s living history is found within the walls of the National Archives. Last night’s event gave us the chance to showcase not just Taylor Branch’s legacy, but the breadth and depth of the stories in the National Archives,” said Foundation Executive Director Madden.

“From marriage equality, to law enforcement engagement with the communities they are sworn to protect and serve, to that most fundamental American right – the right to vote –the need to learn from the civil rights struggles of the past remains vital and urgent,” added Holder. 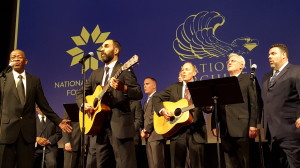 Last night’s gala included a red carpet reception, an awards ceremony in the Archives’ William G. McGowan Theater, and a seated dinner in the Rotunda Galleries, celebrating the public-private partnership between the National Archives and the nonprofit National Archives Foundation. Soulful Revue – the all-male ensemble choir for which Branch serves as Director – made a surprise appearance, with a shocked Branch joining them in an impromptu performance.

Mr. Branch began his career in 1970 as a staff journalist for The Washington Monthly, Harper’s, and Esquire. He holds honorary doctoral degrees from ten colleges and universities. Other citations include the Dayton Literary Peace Prize Lifetime Achievement Award in 2008 and the National Humanities Medal in 1999, awarded to him by President Clinton at the D.A.R. Constitution Hall. Sample of book reviews, lectures, media appearances, blogs, printed commentary, and musical tracks are available on the website, taylorbranch.com