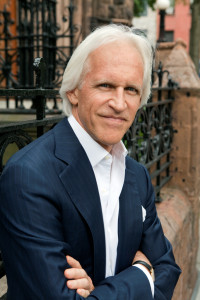 The Foundation for the National Archives today announced that author of The Monuments Men and award-winning historian Robert M. Edsel will receive its 2014 Records of Achievement Award. The honor, to be celebrated at a ceremony on October 28, recognizes Edsel’s outstanding work, bringing to life the storied history of the men and women who served in the Monuments, Fine Arts, and Archives section of the Western Allies during World War II, known collectively as “the Monuments Men.”

“Robert Edsel has long been a tireless and effective advocate for the Monuments Men and the cultural history they were committed to saving,” said A’Lelia Bundles, Chair of the Board of the Foundation for the National Archives. “Through his work preserving and documenting the story of these brave men and women, Robert has allowed a whole new generation to be inspired by their dedication.”

“Robert Edsel has rescued from history not only priceless looted art albums, but the equally priceless stories of the brave men and women who risked their lives to save artistic and cultural treasures, said David S. Ferriero, Archivist of the United States. “He is a modern day ‘Monuments Man.'”

“I am enormously grateful to the Foundation for the National Archives for this endorsement of my work honoring the Monuments Men,” said Edsel. “To be recognized alongside such legends as Steven Spielberg, Tom Brokaw, Ken Burns, and David McCullough, to mention just a few of the past recipients, is truly a humbling moment.”

Edsel’s work highlights the critical value that the National Archives, with facilities throughout the country, continues to provide in uncovering treasured artifacts and powerful stories from our nation’s history. The National Archives holdings include original records of the Monuments Men and many priceless documents, which they discovered including dozens of albums created by the Nazis as a record of the stolen artifacts. These albums were later used as evidence at the Nuremberg Trials. Edsel and the Monuments Men Foundation donated “Hitler Album 6” to the Archives just this past spring. It was the fourth such album donated to the Archives by Edsel and the Foundation in the past seven years.

The Records of Achievement Award is an annual tribute given by the Foundation for the National Archives to an individual whose work has fostered a broader national awareness of the history and identity of the United States through the use of original records. Previous recipients of the Foundation’s awards include: Tom Brokaw, Ken Burns, the late John Hope Franklin, Annette Gordon-Reed, Brian Lamb and C-SPAN, Jacqueline Badger Mars, David McCullough, James McPherson, David M. Rubenstein, and Steven Spielberg.

Mr. Edsel will receive the award at the Foundation’s annual Gala, held at the National Archives in Washington, DC, on October 28. Nick Clooney, who appeared in The Monuments Men directed by his son George, will chair the gala and moderate part of the evening’s program.

Mr. Edsel has dedicated more than twelve years to painstaking and far-reaching research about the Monuments Men, leading to the publishing of his first book Rescuing Da Vinci, a detailed pictorial account using some 460 photographs, many never before seen. Since then, Mr. Edsel also co-produced the Emmy-nominated documentary film, The Rape of Europa, and produced an educational program entitled The Greatest Theft in History, which includes nine hours of video resources and a website of easily utilized teaching resources; published the first study devoted to Nazi Reichsmarshall Hermann Goering’s entire paintings collection, entitled Beyond the Dreams of Avarice: The Hermann Goering by Nancy Yeide; and has written two additional books, The Monuments Men: Allied Heroes, Nazi Thieves and the Greatest Treasure Hunt in History, and Saving Italy:  The Race to Rescue a Nation’s Treasures from the Nazis.  The Monuments Men has been translated into more than 25 languages and served as the basis for Academy-Award winner George Clooney’s film of the same name, released earlier this year.

Mr. Edsel is also the Founder and Chairman of the Board of the Monuments Men Foundation for the Preservation of Art, a not-for-profit entity, which was one of ten recipients of the 2007 National Humanities Medal, presented by President Bush during a ceremony held in the East Room of The White House.