Spring has finally sprung, and in Washington, D.C., the cherry trees along the Potomac River have reached peak bloom. In a typical year, millions of locals and visitors alike travel to the District for a glance at these famous trees at the height of their beauty. A gift to the United States from Japan, the cherry trees are one of the most recognizable gifts to the U.S. from another nation.

In March 1912, 3,020 cherry trees arrived in Washington, D.C. On March 27, two of these cherry trees were planted along the Potomac River by First Lady Helen Taft and the Japanese ambassador’s wife. The remainder of the trees were planted along the Tidal Basin, and a few were even planted on the White House grounds. The cherry trees are celebrated annually at the National Cherry Blossom Festival and are a beautiful reminder of the friendship between Japan and the United States.

Diplomacy’s gifts of friendship are common among nations. The United States has received all kinds of gifts from foreign governments, ranging from jewelry, swords, tea sets, works of art, monumental sculptures, and live animals! This week, we bring you the backstory of a few of these remarkable gifts.

In recognition of the help they had received from the United States during and after World War II, the people of the Netherlands gave the American people a carillon, a percussion instrument with bells that are played with a keyboard and foot pedals. The 50 bells in the Netherlands Carillon are housed in an open steel bell tower.

Queen Juliana of the Netherlands presented President Harry S. Truman with the first bell for the carillon on April 4, 1952.

The ceremony took place in Meridian Hill Park in Washington, D.C. When the remaining 49 bells arrived in the U.S. in 1954, the carillon was temporarily installed in Potomac Park. Each of the bells bears an inscription and an emblem representing a group in Dutch society. Finally, in 1960, construction of the permanent bell tower was completed near the United States Marine Corps War Memorial in Arlington, Virginia.

The carillon automatically plays the Westminster chimes on the quarter of each hour, but concerts of carillon music are also held by the National Park Service, which manages the site. A musician who plays a carillon is called a carillonneur. Only very skilled carillonneurs are permitted to play the Netherlands Carillon.

The President serves as the chief diplomat and ceremonial head of state when visiting other heads of state. President William Jefferson Clinton had a private audience with Pope John Paul II, who was the head of state of Vatican City and the bishop of Rome, in 1994, during which the two discussed religious freedom, world population growth, and the role of the family in society. The Pope presented President Clinton with

this glass mosaic of the Roman Coliseum.

She stands in New York Harbor, facing southeast toward the open sea. For countless immigrants, she has been the first to greet them as their ships sailed past her. Standing 305 feet and one inch tall from her base to the tip of her flaming torch, she is in every sense of the word majestic. The statue is one of the most famous gifts to the people of the United States from the people of another country, in this case, France. Designed by French sculptor Frédéric Auguste Bartholdi, the copper statue was constructed over a metal framework created by Gustave Eiffel, he of the famed tower in Paris. She holds on her left arm a tablet inscribed with the date of U.S. independence, July 4, 1776, and holds aloft in her right hand a torch. Constructed in France and shipped to the United States in multiple crates, the

statue was assembled on Bedloe’s Island. On October 28, 1886, the statue was dedicated with a ticker-tape parade through the streets of Manhattan, a nautical parade to the island, and an address by President Grover Cleveland.

In February 1972, President Richard M. Nixon traveled to China, a trip that opened the doors for diplomatic and trade relations between the two countries. Shortly thereafter,

Ling-Ling and Hsing-Hsing, two giant pandas, arrived from China on loan to the National Zoo in Washington, D.C. First Lady Pat Nixon officially accepted them on behalf of the nation. The Chinese government has continued to loan pairs of the famous bears to the National Zoo for nearly fifty years.

Can You Guess the Country?

The exchange of gifts among kings and chiefs and presidents and premiers is a centuries-old tradition. Can you guess which country each gift to the U.S. came from? 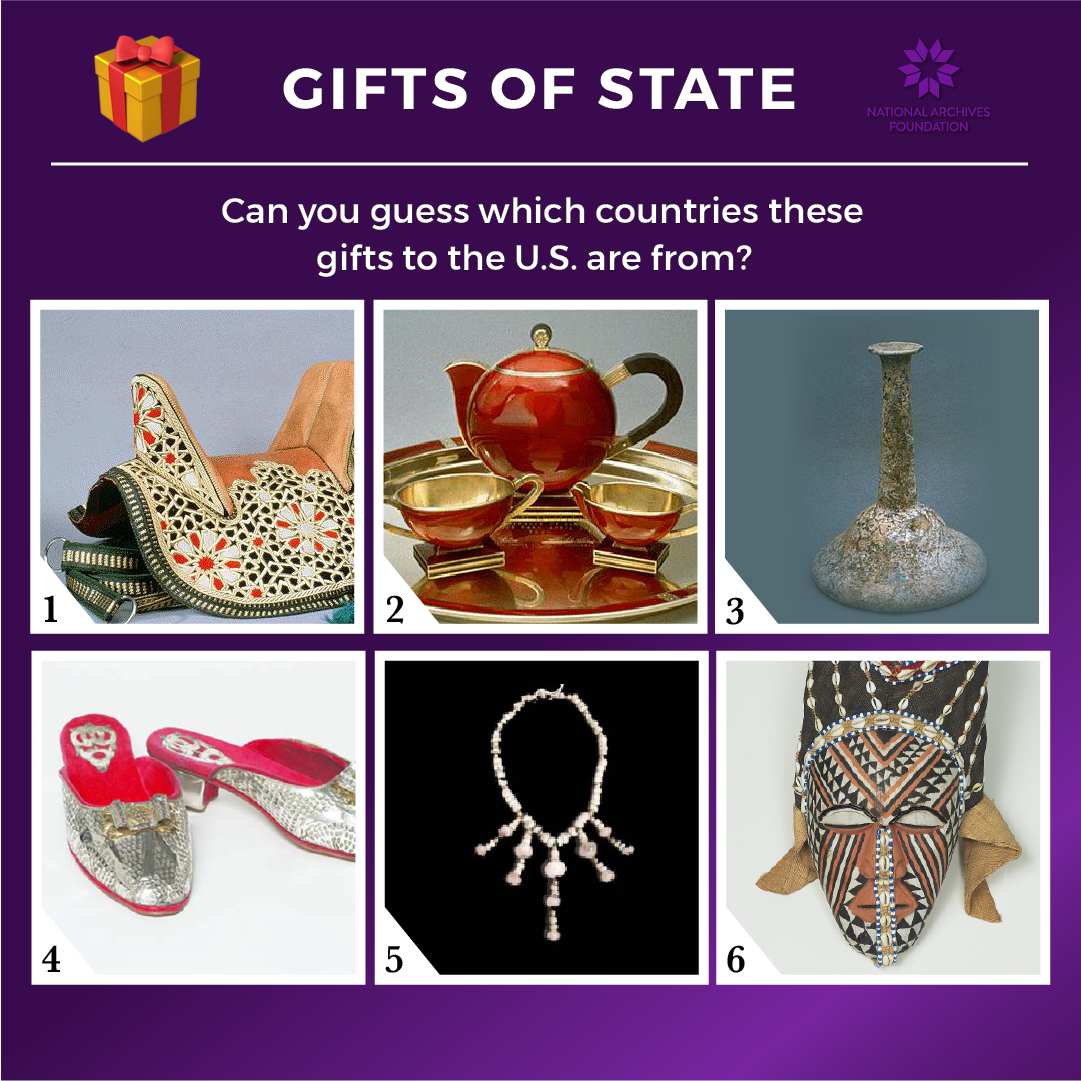 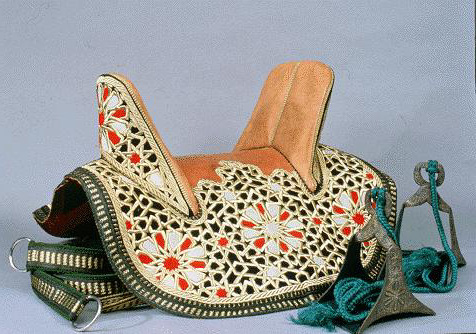 1) Algeria – Saddle
Because of his love for riding, President Reagan received dozens of saddles from both the general public and foreign leaders. Chadli Bendjedid, President of Algeria, presented this richly embroidered saddle during an official state visit in April 1985. 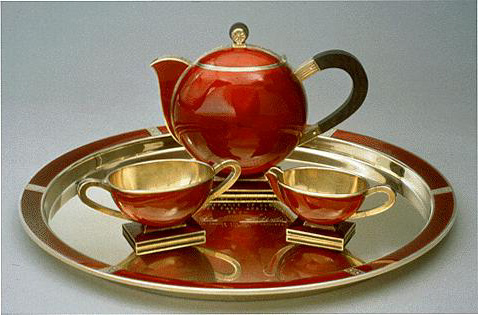 2) Norway – Tea set, by David Andersen, Oslo, Norway, ca. 1930s
This tea pot, sugar bowl, creamer, and tray were a gift to President Roosevelt from Olav and Martha, the Crown Prince and Princess of Norway. 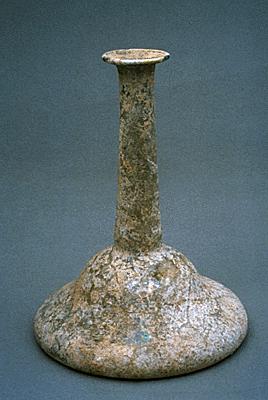 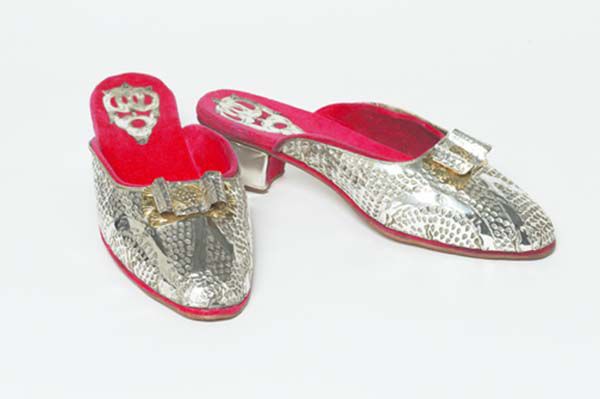 4) Libya – Pair of Slippers
These slippers were presented as a gift for the First Lady to President John F. Kennedy by Hassan Rida el-Senussi, Crown Prince of Libya, during his state visit to the White House on October 16, 1962. 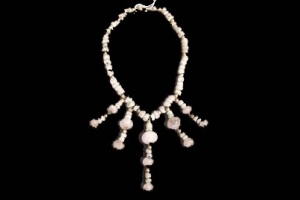 5) Mexico – Jade and Quartz Necklace
This necklace was a gift from Gustavo Diaz Ordaz, the President of Mexico, to President Lyndon B. Johnson. It consists of pale green jade and white quartz beads, with gold beads interspersed throughout. The jade beads are believed to be of pre-Columbian age and of Guatemalan origin. 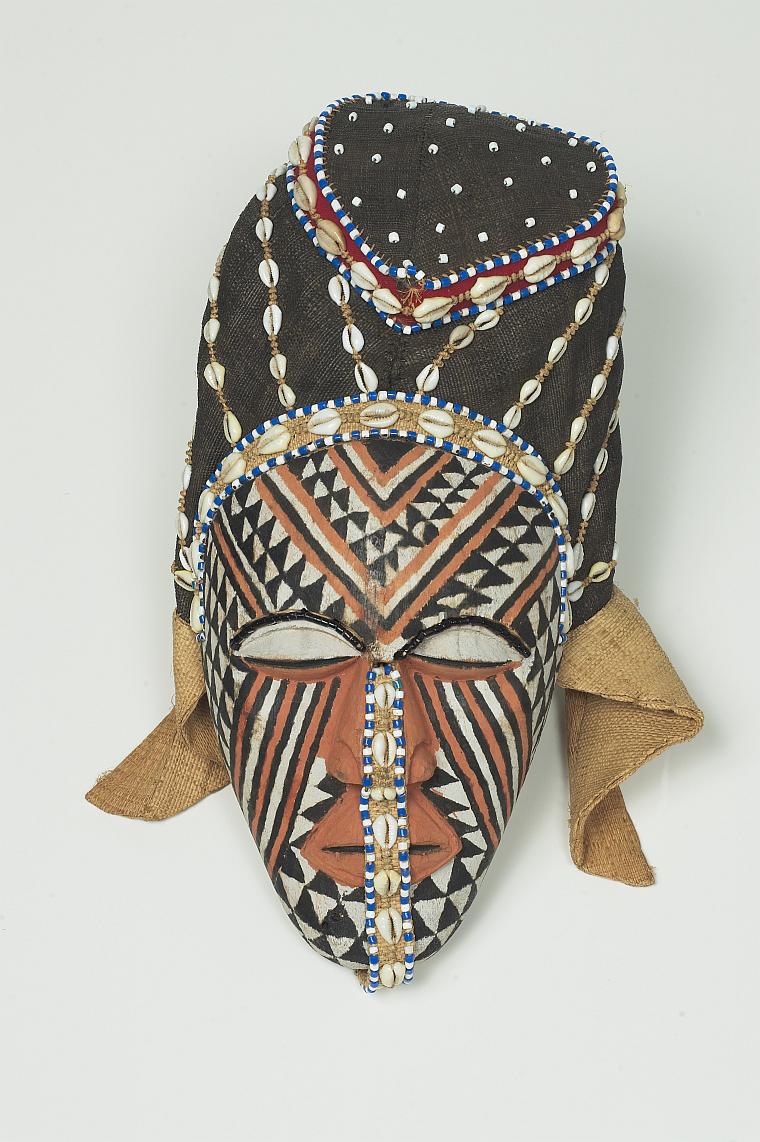