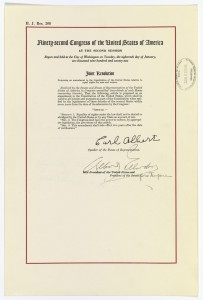 The Equal Rights Amendment (ERA) passed Congress in 1972 and was quickly ratified by 35 of the 38 states needed for it to become part of the Constitution. As the seven-year time limit for ratification approached in 1979, Congress and President Jimmy Carter controversially extended the deadline three years. However, no additional states ratified.